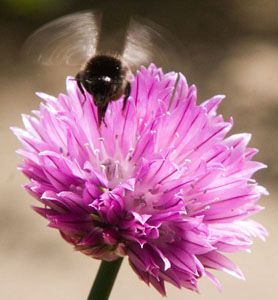 I've always enjoyed seeing bumblebees on and around flowers in gardens, with their majestic and sonorous flight. Since 2013 we have had bees regularly nesting behind an airbrick on the house wall just outside the back door. This aroused my curiosity even further, so I read some books and started learning to identify the different types.

Bumblebees have been in decline in recent decades. This started with the changes to modern farming methods from the 1960s, with easy availability of fertilisers obviating the need for traditional crop rotation with some land left fallow, hedgerows being curtailed or replaced with bare fencing, and traditional hay-making being replaced by silage production for which the grass is cut down earlier in the season. More recently climate change, increased transmission of pests across national boundaries and the increased use of pesticides, particularly neonicotinoids, in farming have presented further threats to bumblebees and other pollinating insects. So in 2015 I joined the Bumblebee Conservation Trust, a charity whose mission is to promote the survival of these important pollinators and help ensure they are able to prosper again. Thankfully, the need to protect bees and provide sufficient habitats and forage for them is now increasingly recognised: farmers have for a few years now been incentivised to provide areas of flower meadows around their fields, and there is an increasing push for local and transport authorities to provide bee-friendly habitats wherever possible, such as along roadside verges and railway lines.

A lot of people don't realise how much we actually depend on bumblebees. Do you like tomatoes? Bumblebees are crucial for tomato pollination as this requires a method called "buzz pollination" which only bumblebees can do. Though honeybees are also important - as well as the only source of honey we eat - they are not by any means the only species we need to ensure our crops are fully pollinated and can grow to give us food. Many fruit and vegetable growers in fact now import bumblebees commercially from Europe to ensure their produce crops successfully!

Bumblebees are social insects like honeybees, common wasps and ants. At the head of each colony is a queen who normally does all the egg-laying. Once her nest is up and going she is supported by a team of workers, also females but who don't normally lay eggs. Male bees are only produced towards the end of the season.

Female bees - queens and workers - can sting, though they are peaceful creatures who will normally never attack you unless you accidentally trap or squash them or closely disturb their nests. The one exception to this is the tree bumblebee, who will readily nest in house walls or bird boxes and may then attack people causing loud vibrations that are affecting their nests, for example when lawnmowing.

Male bees are completely harmless to us as they do not have stings.

Bees are totally vegetarian, feeding on nectar for energy and using pollen produced by flowers as their sole protein source. All bees have 'honey stomachs' where they can hold nectar, either for later consumption or to take back to their nests. Queens and workers also have pollen baskets on their rear legs so they can carry useful quantities back to the nests, where it is essential for the proper growth of their larvae.

Compared to honeybees and wasps, bumblebee nests are short-lived, often fulfilling their purpose and then being abandoned within 3 or 4 months. Nests almost never persist through the winter - instead, newly reared queens mate with males and then hibernate, underground or in cracks in walls etc, before re-emerging the following spring to set about founding new nests of their own.

After feeding on flowers to replenish themselves, the queens search around for suitable nest sites - you may often see them flying low-down over the ground in spring while doing this. After finding a suitable place, the queen collects an initial stock of nectar and pollen and then lays a batch of eggs over the latter. She then incubates and feeds her larvae until they pupate and, in due course, hatch into her first batch of workers. These first workers are often fairly small.

Once the first workers have hatched they take over the task of foraging for food and many of the household chores, leaving the queen to concentrate on laying new batches of eggs. But the queen usually builds the egg cells herself and oversees them until they hatch into larvae. In this way, the number of worker bees in the nest steadily increases.

A point is then reached where the queen starts laying male eggs, and from then on the remaining female eggs she lays grow into new queens. Sometimes some of the workers also lay some male eggs at this stage. Once hatched, the males leave the nest to find other new queens to mate with.

Though the new queens readily fly about, they often remain based in the nest for a couple of weeks or so, sometimes helping to raise the remaining brood or with foraging. Having mated, though, they feed themselves up and soon either hibernate, or, in some species, if it's not too late in the summer they may start a second or third nest cycle.

But there is one type of bumblebee that doesn't follow the above pattern. These are the cuckoo bumblebees whose females, as the name suggests, take over other bumblebees' nests. After killing or subduing the nests' original queen, they lay their own eggs and get the workers already there to raise these. Cuckoo bees do not produce their own workers, and do not forage for food - they don't even have pollen baskets. The only offspring they produce are males and the next generation of cuckoo females, so the latter are usually just termed females rather than queens. Each species of cuckoo bee generally takes over the nests of a particular kind of social bee, for example red-tailed cuckoo bees attack ordinary red-tailed bumblebees.

Bumblebees (in common with honeybees, wasps, ants and all the other hymenoptera family of insects) have a different system of genetics from us warm-blooded animals. Whilst the female insects, like ourselves, have two sets of chromosomes, and are said to be diploid, males only have a single set - they are haploid. Females' ovaries, again like ours, produce eggs with just one set of chromosomes. When a queen (or cuckoo female) mates, she stores the male's sperm in a special storage organ called her spermatheca, where it remains viable for many months. When she lays an egg, she can choose whether or not to fertilise using this stored sperm. If she does, the egg grows into a female - a queen or worker in the case of a social species. But if she doesn't, the egg will still grow and develop into a male. If a worker bee lays eggs, she has no sperm to fertilise them with, so they will all grow into males. Thus only the queen can raise female offspring. A further bizarre consequence of this system is that male bees have no fathers, but do have grandfathers! It is also the case that all of a male's sperm are genetically identical.

British bumblebees seen in my garden and nearby